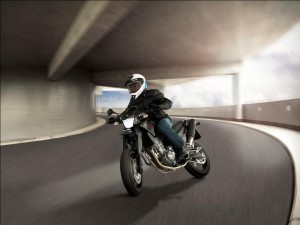 Welcome To The Punch

The London based production company, Between The Eyes, has chosen to XT660 for its slick urban looks and city-shredding performance.

The bikes will feature in the film alongside British actors James McAvoy (X-Men: First Class) and Mark Strong (Sherlock Holmes). According to Yamaha, there are six units of Yamaha XT660X which ready to act on the Welcome To The Punch movie.

What makes Between The Eyes production company sets it eyes on Yamaha XT660X? Here is what they say, “Resplendent in menacing but stylish black bodywork, the Yamaha XT660X’s will reflect the adrenalin packed nature of the Welcome To The Punch movie perfectly, looking right at home on the streets of London. Principle photography for the film, which is being directed by Eran Creevy (director of BAFTA nominated film ‘Shifty’), started on 18th July and is being filmed on location around the famous London landmark, Canary Wharf, as well as 3 Mills Studios.”

Make sure you keep your eyes peeled for Welcome To The Punch in 2012.