Supermoto rider Mauno Hermunen was one of the first people in the world to have tried out Husqvarna’s road-going new NUDA 900 R.

Suspension and forks are top-notch Sachs and Öhlins components and the 900cc engine has an output of more than 100 bhp and 100 Nm (73lb-ft) of torque, with a dry weight less than 175kg (386lb). Nuda features a reworked 900cc version of BMW’s 800cc parallel twin engine. Husqvarna claims the new 900 will be “linear and smooth at low rpm, but strong and outstanding at high revs”.

Premium components have been used throughout its construction – it has fully-adjustable Őhlins suspension at the rear, and fully-adjustable Sachs forks at the front, as well as Monoblock radially-mounted four-piston Brembo brakes at the front and an exhaust system equipped with carbon parts. 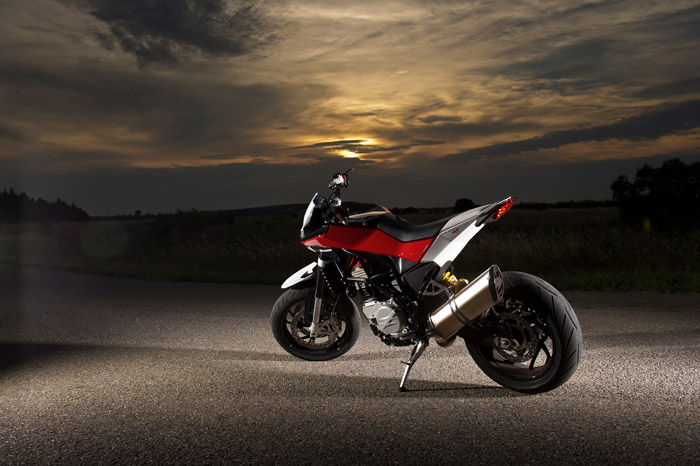 For Mauno, who currently rides a Husqvarna SMR449 and is just two points from the top in the Supermoto World Championship standings, the motorcycle’s design is a personal highlight. “For me, one of the main things is the style,” he says. “The design is so typically Italian, it’s a really great-looking bike – there is nothing else which looks like it. It’s just so sharp, it looks really dynamic and in my eyes, it just couldn’t look better.”

The championship contender has been racing since he was a child, first in motocross, graduating to supermoto after an impressive 15-year career. He is hungry to be World Champion and with three races left this season and just that tiny gap between himself and the leader, the title is within reach.

Mauno, who spends hours every week training on his SMR449, says the street bike is the perfect balance between performance, technology and style – the three key elements which went into its creation. “Having been lucky enough to be one of the first to ride the bike, I know how nice its power delivery is. It’s so smooth – but with a frame and engine from BMW and the brand’s trademark technology behind it, that’s hardly surprising. It doesn’t just look good, sound good, and feel good, it’s a reliable motorcycle too. And on top of that, it has the great Italian design. It’s really the perfect combination of the performance, technology and style.”

“If I had to sum up the new NUDA 900 R in just three words, I’d say performance, fun and style. It’s just a really cool bike.”