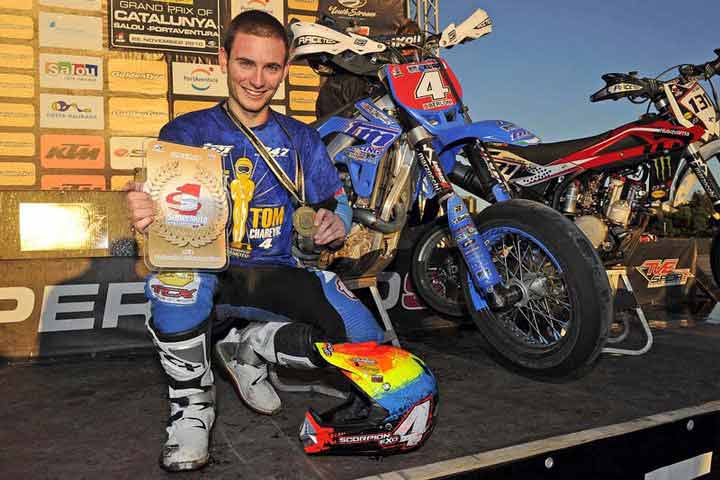 The crowded paddock of Triscina and all the collateral events featuring the fourth challenge of the FIM SuperMoto World Championship and UEM European series created a pleasant background for the blazing Grand Prix of Sicily August 28, 2011.

This weekend event did not disappoint fans’ expectations, on the contrary, they were really eager to see the SuperMoto action coming back to Sicily and putting on stage a rousing show.

In the S1 class the winner was defending World Champion Thomas Chareyre followed by Adrien Chareyr in second and third classified Ivan Lazzarini.

The big name of the European campaign, Teo Monticelli, was the stunning leader of today’s Open heats while the other two spots of the podium went to Petr Vorlicek and Pavel Kejmar.

The time table of the day was enhanced by the GoldenTyre Trophy. The two motos saw many local riders battling through the pack to make up ground, but the three fellows who starred and won the GT prize money were victorious Antonino Vallone, together with second and third classified Giorgio Puglisi and Domenico Ricchiari.

Triscina was the SuperMoto hotspot of August, the place to be for the Sport’s fans that attended the GP of Sicily. Since the early morning the paddock of the International Circuit of Triscina, Castelvetrano, was full of guests that decided to experience a racing day instead of spending their Sunday at the beach and they very satisfied with this decision.

The greatest day of the weekend offered three S1 motos that were incredibly fizzy. Race 1 started immediately after the Opening Ceremony of the GP and Superiders pulled away as the red lights blinked off. Fast Wheels ASD French Adrien Chareyre, author of the Superpole, was the fastest at the begin of the session thanks to a solid start but as soon as TM Factory Racing Thomas Chareyre saw the chance of gaining one spot he ousted his brother. HM Honda Racing, experienced Ivan Lazzarini, attended the Chareyre brothers’ chase and tried to get closer to Adrien without being able of closing the gap so at the end of the opening race Thomas Chareyre was first, his brother second and Lazzarini third.

In the second moto TM Factory Racing French defending World Champion immediately headed the pack and did not mind the other races apart from one, his older brother Adrien, as he perfectly knew he would have tried to steal the lead from him. Adrien Chareyre was following his brother’s shadow and the two left behind rivals so they could manage a face to face dog fight with two astonishing double overtakings: Fast Wheels French member imposed his pace over Thomas who did not think twice before fixing the situation and taking back the first place. Same situation of the first heat for Ivan Lazzarini, who found himself in the middle of nothing, divided from the French duo by a 0:19.734 gap and could live a solitary race as the rest of the pack was pretty far from him. The trio took the chequered flag in the order, with Thomas and Adrien Chareyre first and second, while Italian Lazzarini collected another third spot.

Last but not least, Race 3 was the final occasion for Fast Wheels ASD French challenger Adrien Chareyre to prevail on his brother, who is like all the other rivals when they are on track. Adrien was observing his main enemy when Thomas did a little mistake that allowed the Fast Wheels ASD racer to grasp the leadership. After all the efforts done Adrien hold it tightly till the very end of the moto and classified in front of Thomas and Ivan Lazzarini.

The crowd and workers watched the intriguing races with bated breath as there were many unexpected crashes. In the opening heat Rigo Racing and podium favorite Andrea Occhini crashed when he was riding in fourth and spent the rest of the race recovering positions, while in second moto he was solid; another run of ill luck affected the Italian’s outcome as he crashed in the final moto. Not even Mauno Hermunen of the Husqvarna Factory Team was so lucky as he crashed in the first two motos but at least he was amazing while recovering positions in the final one.

Thanks to his result, the winner of the Grand Prix of Sicily and defending World Champion Thomas Chareyre confirmed his leadership in the point standings while both Adrien Chareyre and Ivan Lazzarini gained one spot and now they are in second and third, while Mauno Hermunen lost ground and is in fourth.

Championship standings leader Teo Monticelli, of the Freccia Team, definitely has the perfect feeling with his Honda machinery so after the tough work done with his squad he had all the chances to win the Sicilian race and that is exactly what he did. Teo Monticelli, also called “terminator” was the shining star of today’s three motos and stood on the highest step of the podium between the strongest Czech rivals Tuning Sport Petr Vorlicek and Pavel Kejmar, second and third respectively.

Other racers drew the attention of the Sicilian crowd, among them there were Alessandro Tognaccini of KTM 747 Motorsport, KTM Motoracing Mattia Martella and Monticelli’s team mate Massimiliano Porfiri, who were respectively fourth, fifth and sixth. Even Jan Deitenbach, Martella’s fellow Marco Dondi, Suzuki Valenti Lux Performance Thomas Gory and HM Honda Racing Lorenzo Lapini did their best and completed the top ten. Turkish Ata Nurcan was 11th overall and finished in front of compatriot Sakir Senkalayci.