The three riders picked for MXoN 2011 will practice together during special occasions before the huge event in September 17-18 at Le Circuit du Puy de Poursay France.

Thirty countries send their best three riders
to compete in three classes (MX1, MX2, MX3)
that are based on the FIM World Motocross GP Championship.

More on Motocross of Nations 2011 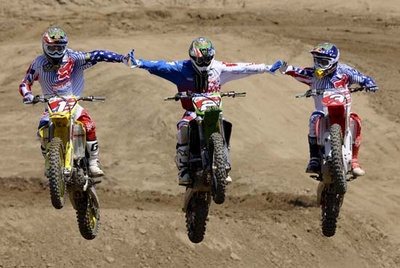 The United States is the reigning champion of the Motocross of Nations, winning in 2010 when the event was held in Lakewood, Colorado. And for 2011 MXoN in France The American Motorcyclist Association has announced the three riders who will represent America: Ryan Dungey, Ryan Villopoto and Blake Baggett.

“America’s talent pool for motocross racers is the deepest in the world,” said AMA Supercross Director Kevin Crowther. “As demonstrated by their performances in this summer’s Lucas Oil AMA Pro Motocross Championships, these three riders are among the best that the United States has to offer. We’re confident they will do their country proud at this prestigious event.”

The Motocross of Nations is one of the most high-profile motorsport events in the world. It features national teams competing for a combined score to determine the overall championship-winning country. The event emerged in post-war Europe in 1947 and has run uninterrupted since that time. The United States is the all-time leader in Motocross of Nations overall victories with 21. Great Britain is second with 16. 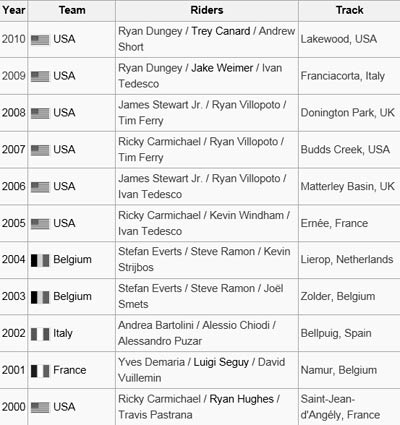 2010 Media from Motocross of Nations